A little while back I was working somewhere, where, if you were from Mars and asked to work out how people were remunerated, you would probably conclude that the amount of sweat people produced in a day was measured and converted directly into salary. This “adrenaline junkie” has always been a common antipattern in the City – I have done it myself – occasionally lol. As Ronald Reagen said “It’s true hard work never killed anybody, but I figure, why take the chance?” 🙂 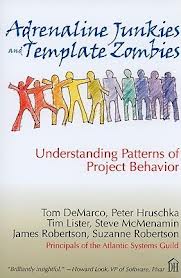 This book was published a number of years ago and contains some memorable antipatterns (86 in all collected by a whole bunch of authors and project managers around the world) – another one is Dead Fish … where at the start of a project there is a bad smell but no one feels able to mention this and the project carries on regardless with the inevitable consequences. The Template Zombie refers to those whose job it is to make sure that all the paper flow is doing the right thing – a real triumph of process over content.

But let’s take a step back as the chances are you have never heard of antipatterns… What is an antipattern? From wikipedia:

In software engineering, an anti-pattern (or antipattern) is a pattern that may be commonly used but is ineffective and/or counterproductive in practice.

The term was coined in 1995 by Andrew Koenig, inspired by Gang of Four’s book Design Patterns, which developed the concept of design patterns in the software field. The term was widely popularized three years later by the book AntiPatterns, which extended the use of the term beyond the field of software design and into general social interaction. According to the authors of the latter, there must be at least two key elements present to formally distinguish an actual anti-pattern from a simple bad habit, bad practice, or bad idea:

I heard a talk by a couple of the authors some time back, the key points that stuck in my mind were:

i) these patterns have been seen around the world on completely different types of project – so they are kind of “strange attractors”, patterns, archetypes of human behaviour in a group effort;

ii) they say that the disfunctional patterns are always more interesting and amusing than the “good” patterns – and say they have seen this elsewhere;

iii) a family therapist wrote to them from New Zealand saying that 60% of the patterns in the book apply very well to family therapy (!)

The fascinating point is that in general they say the most important approach to fix these antipatterns is to (a) name something and (b) bring it out into the open. Then, they believe, most folks are bright enough to fix it themselves (I believe the book contains no remedies to the patterns for this reason). Not-named and not brought into the open and the “issue”/”disfunction” persists… [This “naming & claiming” is the very same process that is the core of much therapy/meditation (and certainly the in-fashion CBT)]

Naturally different organisations (whether a huge company or a persons psyche) will be more or less resistant to change. Disfunction can persist for some period of time, but the longer the “stuckness” has persisted, the more of a crisis when change finally has to happen.

How many antipatterns do you see around you? Of course “News Improvement” is pervasive these days … communications from my daughters school could have been written by Alastair Campbell. What about “Telling the Truth Slowly”? “Happy, clappy meetings”? “Lease your soul”? “Film Critic”? Not to forget… “Time Removes Cards From Your Hand”.

This entry was posted in 21stC Business and tagged Business, Consultancy, No Fixed Answer, Stress Management, Wisdom into Business. Bookmark the permalink.